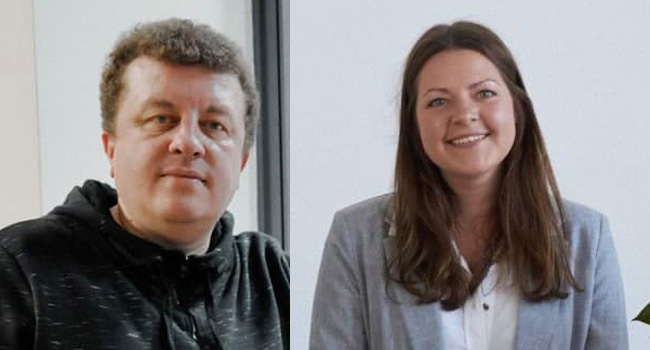 Today, one year since the detention of Andrei Aliaksandrau and Irina Zlobina, Index on Censorship and ARTICLE 19 are launching a campaign aimed at amplifying calls for their immediate and unconditional release. Andrei and Irina have been behind bars since 12 January 2021, when they were detained and imprisoned for their defence of fundamental human rights.

A journalist and human rights defender who previously worked at both Index on Censorship and ARTICLE 19, Andrei is now facing charges of “treason to the state”. The charges stem from allegations that he paid the fines of journalists and protestors detained during the pro-democracy protests that were triggered by the highly disputed 2020 presidential election. Belarusian law enforcement agencies erroneously equate this with financing unlawful protests. If convicted, Andrei will face up to 15 years in prison.

“Thanks to you, and other good people, my conscience is clear,” he wrote to a friend last year.

His partner, Irina was also detained “on suspicion of financing protest activities” and has since been charged with “organization and preparation of actions that grossly violate public order”. She is facing up to three years in prison.

“We invited journalists, human rights defenders, press freedom activists and friends of Andrei and Irina to record short video messages for the campaign. Those videos will be shared on social media in the coming days,” ARTICLE 19 and Index on Censorship said. “As Andrei’s former colleagues, we want as many people as possible to know how incredibly kind and generous he and Irina are, and to understand the unfathomable injustice they are both facing at the hands of the Belarusian authorities.”

We urge you to help us call for their immediate and unconditional release by joining our campaign:

Help us to demand that the Belarusian authorities release Andrei and Irina now.

I am writing to you to express my concern about the arrest of a prominent Belarusian journalist and human rights defender Mr Andrei Aliaksandrau and his partner Ms Irina Zlobina.

The couple were arrested in Minsk on Tuesday, 12 January 2021. Mr Aliaksandru is believed to have been charged with a public disorder offence relating to the ongoing protests against president Alexander Lukashenko.

After his arrest police conducted a search at the offices of the independent BelaPAN news agency to look for evidence related to the criminal case against Mr Aliaksandrau. Mr Aliaksandrau is no longer a BelaPAN staff member, having left his post as deputy director in 2018. Nonetheless, several pieces of equipment were confiscated from BelaPAN’s offices, including personal computers.

I note that a video statement was released on 15 January 2021 by law enforcement officials in which it appears that Mr Aliaksandrau admits to the allegations. I am concerned that he might have been coerced by being tortured or ill-treated into making this statement. Please note that any evidence obtained by torture or ill-treatment is inadmissible in court.

Mr Aliaksandrau is a long-standing champion of media freedom, having sought to uphold this fundamental right as a journalist, and through his work at freedom of expression NGOs including both Index on Censorship and ARTICLE 19. He also worked for the Civil Solidarity Platform, a network of civil society human rights organizations from the former Soviet Union.

I am extremely concerned to learn that he is being detained as a suspect in a criminal public order case instituted by the Minsk Department of the Investigative Committee.

I ask you to immediately release Mr Andrei Aliaksandrau and Ms Irina Zlobina from their detention.

How you can help:

Keep up to date!

Stay in touch with the campaign by signing up for regular updates. Just sign the petition and check the 'get updates' box. We will send you an email when we have news.

Contribute towards the costs of the campaign to #FreeAndreiandIrina

About Andrei and Irina

Andrei is one of Belarus’s most prominent independent journalists. He is the founder of JournalBy.com and has worked for a wide range of Belarusian media, as well as leading media freedom programmes for ARTICLE 19 and Index on Censorship in the UK. Andrei also worked as a web editor for Civic Solidarity Platform, a platform of NGOs in the former Soviet Union. He is a lifelong fan of Liverpool Football Club and an even bigger fan of British pubs. Irina Zlobina, Andrei’s partner, also works as a journalist in Minsk.

This campaign has been set up by friends and former colleagues of Andrei. Many of us know him from when he worked at the freedom of expression organisations Index on Censorship and ARTICLE 19.

For media enquiries, or if you think you can help the campaign in any other way, contact: